You may remember my post to this blog, Music To Read Tarot By, recommending some sources of ambient/new age music for use when reading tarot, meditating, etc. This is an update of that post, since I’ve discovered a couple more excellent sources.

As I mentioned on the earlier post, I like to have background music playing when I read tarot. It helps me focus and keep odd external noises from distracting me. I prefer to have fairly neutral music playing, since I worry that anything too emotional might “color” the reading too much. I also prefer music without a beat for this purpose. Recently, I’ve also been playing these stations when napping and sleeping.

bills itself as “Internet Radio pouring out uninterrupted music for sleeping, taking Naps and other more wakeful tranquil moments” and that’s a very fair description. It streams 24/7 with “No ads, no beats, no new-age-cheese.” Most of the music it plays is free for downloading also, although one of the ways the station has been funding itself is by selling CD and downloadable compilations of some of the best music it plays. I applaud this station for keeping the ads out of the stream; there’s nothing more jarring than an upbeat advertisement when you’re in the moment!

Drone Zone is a streaming station from the SomaFM family of Internet radio stations; in fact, it was the first SomaFM station. It bills itself as, “Served best chilled, safe with most medications. Atmospheric textures with minimal beats.” It goes on to say, “Droning atmospheric space music and ambient textures with minimal beats. Music on Drone Zone is all about sonic textures and environments.” You’re likely to hear music by such artists as Steve Roach, Brian Eno, Harold Budd, Robert Davies, etc. The music is scheduled and programmed by Rusty Hodge, the founder of SomaFM and the General Manager and Music Director. SomaFM is listener-supported, mostly by donations. There are occasional channel IDs, but they’re in keeping with the sound of the station, and not intrusive. 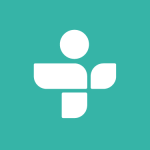 Both of these stations can be listened to directly by going to the websites linked to above, or by using an application like TuneIn. TuneIn’s mobile apps have a sleep timer, which turns a channel off after a given time period, which is handy! SomaFM also has its own app. available.

I’ll make the same request that I did at the end of my previous post about music; do you know of any other sources of this kind of music? If so, please do share in a comment below.

UPDATE: Somebody on Facebook saw this post and commented, including a link to another resource that’s too good not to share here: Ambient Chillout Music Mixes by JaBig. It’s a collection of music by Brian Eno.

One night, I stayed up all night playing poker with Tarot cards. I got a full house and four people died. – Steven Wright

I love Steven Wright, but I always cringe just a little when someone repeats his joke on Twitter – and it happens a lot! It plays into the hands (excuse the pun) of those who are a little afraid of tarot cards. As I have been known to say: There’s nothing magic about tarot cards; they are simply paper, paste, and some pretty pictures in ink. The magic is in our heads.

The way that my readings work is to give you information to empower you. My aim is always to enable you to write your own story. This means that really the only way that the card we call “Death” would represent physical death is if you were engaged in risky behavior that might lead to your demise if you didn’t do something about it. I would assume you’d want to know about that! The truth is that this card, depending on the context, can have many meanings. Sometimes it means making a “clean sweep” and discarding something from the past and moving on into the future. Sometimes it can mean divesting yourself of toxic “friends.” Just the other day, I had “Death” come up at the conclusion of a reading about a relationship; knowing that it would worry the client, I pointed out that in this context, my interpretation was that if something did not change, the likely result would be that the relationship would end. I was delighted when my client got back to me and said they had already done something about it, and the situation was much better.

So, my recommendation would be to stop seeing the “Death” card as a “bad card” and maybe start seeing it as a wake-up call or a card of opportunity. 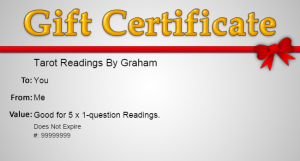 I’m very excited to announce that, just in time for the holiday season, I am now offering gift certificates for readings. If you have friends, colleagues or family members who you think might benefit from my readings, these would make a great gift. While you can purchase a certificate for a single reading for $5, you can save money by purchasing more readings. So a certificate for a three-question reading is $12 and a five-question reading is $20. Recipients don’t have to ask all their questions at the same time, either, so a five-question certificate could provide some great guidance for an entire year (the gift certificates never expire, by the way)! Payment processing is by PayPal (although you don’t have to have a PayPal account to purchase via credit or debit card), so these can be purchased internationally.

For more details and to purchase gift certificates, see my Gift Certificates page.

Demystifying tarot; discussing the process I use to read tarot; helping you to get the most out of a reading; tarot tips; the business of tarot; reviews and related topics.

Subscribe to Graham's Tarot Newsletter to receive e-mail updates on my services, interesting articles and musings on tarot and maybe the occasional exclusive offer (wink wink!). I promise to keep it short and sweet (no-nonsense!), and not bug you more than once or twice a month, unless it's urgent.